In a career devoted to managing family fortunes, I have grown increasingly convinced that – in terms of financial outcome — inheritors tend to be either blessed or cursed from the start.

“You don’t need to be a rocket scientist. Investing is not a game where the guy with the 160 IQ beats the guy with a 130 IQ.” (Warren Buffett Speaks — Janet Lowe – John Wiley & Sons, 2007) More important than IQ, according to Buffett, is rationality and emotional stability.

Counter-intuitively, high-IQ intellectuals tend to limit themselves to what Howard Marks calls “first-level thinking”. (The Most Important Thing — Columbia University Press – 2013). He explains:

“First-order thinkers look for things that are simple, easy, and defendable. They fail to realize that they are dealing with complex systems, or if they do realize it, they mistake cause-and-effect relationships… Second-order thinkers, on the other hand, think in terms of interactions, time, and system dynamics… Things like 1) what are the key variables and how do they interact? 2) where is the leverage? and 3) if I take this action, what happens next?”

The reason highly-educated intellectuals tend to be more vulnerable to Ponzi schemes and other frauds is that they find it hard to say: “I don’t know” or “I don’t understand”. As a result, they tend to convince themselves that they understand – or can understand — confusing propositions. More humble individuals, who rely on common sense rather than on intellect, can recognize the complexity of some situations and the limits of their understanding. As a result, they often are able to avoid the riskiest “opportunities”.

It’s Not About Saving vs. Spending

It is true that frugal inheritors tend to accumulate wealth faster than free-spending ones. But, as long as spending is contained within conservative rules of thumbs, such as 3% of one’s total liquid assets annually, one’s lifestyle should not make a huge difference between secure comfort and the poorhouse.

My observation is that, more often than not, the likely losers are those that make the wrong investment choices: going into iffy ventures without proper due-diligence; buying overpriced houses at the top of the real estate cycle; or systematically chasing the most popular concepts on the investment markets.

In a 2008 paper for the Journal of Financial Economics, two researchers observed that “individual investors have a striking ability to do the wrong thing”. (Dumb money: Mutual fund flows and the cross-section of stock returns — Andrea Frazzini and Owen Lamont,)

Using mutual fund inflows from 1980 to 2003, the authors argue that no matter which mutual fund they choose, individual investors tend to underperform that particular fund – over several years. They conclude that fund flows are “dumb money” because, by reallocating across different mutual funds, investors reduce their wealth in the long run. We would add that the observation holds for professional investors as well, except that it is their clients’ wealth that they reduce.

Strength of Character Is what Counts

Lack of character is often evidenced by the perceived need to show decisiveness by constantly making new decisions. In investment terms, this translates into over-trading or the constant change of fund managers.

Because other investors, the media and most consultants and fiduciaries will constantly attempt to veer you towards the utterly fallible crowd consensus, it is crucial to keep thinking independently. This means having the strength of character to recognize and resist pressures to conform and it is an essential quality for long-term investment success.

This necessary independent bent applies to the selection of investments, but also to the choice of fund managers.

In one of Plato’s “dialogues”, Socrates says that people make themselves ridiculous when they try to know obscure things before knowing themselves.

More recently, Charlie Munger one of today’s savviest investors remarked: “I came to the psychology of human misjudgment almost against my will; I rejected it until I realized that my attitude was costing me a lot of money”.

And Seth Klarman, another of today’s outstanding investors, adds: “Understanding how our brains work – our limitations, endless mental short cuts and deeply ingrained biases – is one of the keys to successful investing”.

The initial reaction of many recent inheritors or otherwise-successful stock market neophytes is to enroll into courses of finance and investment. But before seeking deeper financial education, they would be well advised to become better at introspection.

In view of the above, it should not surprise that the 2002 Nobel Memorial Prize in Economic Sciences was awarded to a psychologist, Daniel Kahneman, known for his work on the psychology of judgment and decision-making. His work contributed importantly to the growing popularity of behavioral finance and its study of our natural biases, in recent years. Some of his insights, gathered from brainyquote.com, are relevant to our discussion:

“We’re blind to our blindness. We have very little idea of how little we know.”

“We are prone to overestimate how much we understand about the world and to underestimate the role of chance in events.”

“Our comforting conviction that the world makes sense rests on a secure foundation: our almost unlimited ability to ignore our ignorance.”

“We’re generally overconfident in our opinions and our impressions and judgments.”

“The confidence people have in their beliefs is not a measure of the quality of evidence but of the coherence of the story the mind has managed to construct.”

“It doesn’t take many observations to think you’ve spotted a trend, and it’s probably not a trend at all.”

“True intuitive expertise is learned from prolonged experience with good feedback on mistakes.”

We Are Cyclical Animals with Bipolar Tendencies

Anxiety, the opposite of Buffet’s rationality and emotional stability, exacerbates our tendency to succumb to euphoria or panic. The psychological cycle of investment has long been well recognized and depicted in charts such as the following one: 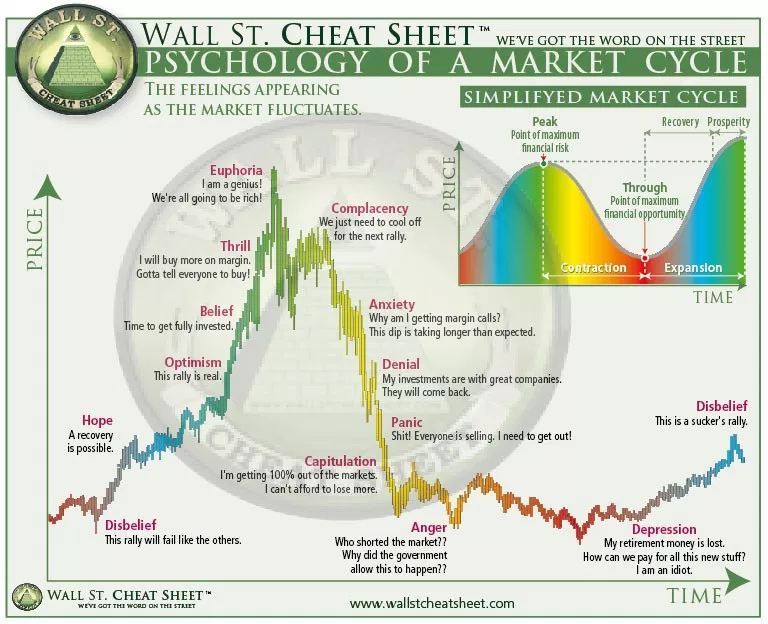 The “belief” and “thrill” phases are those when outside pressure on money managers to be more aggressive becomes both intense and persistent.

The knowledge of our natural biases, plus systematic introspection, should help us avoid some common investment pitfalls or, at least, repeating the same errors. And yet, I cannot resist mentioning that, in the past year, a growing number of consultants and fiduciaries, as well as very few clients, have been pressuring us to use our precautionary cash reserves to become more fully invested in the stock market. 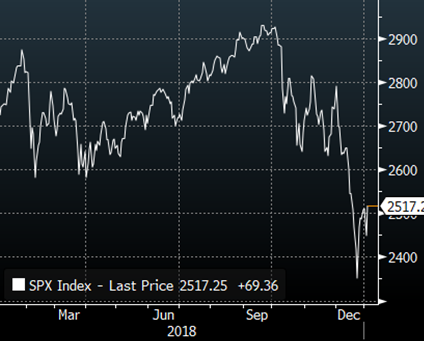 Second (and last), Know Thy Advisers

The great advantage of investors over their advisors is that they are not paid to recommend change. As a result, they can exercise the most important quality of successful investors: patience.

It is essential for successful long-term wealth-building to entrust an adviser who also can think independently and have the patience and strength of character to resist the pressure of the investment crowd and its followers.

This strength and resolution are what we wish our clients and ourselves for this New Year.

** The STANDARD & POOR’S 500 index is an American stock market index based on the market capitalizations of 500 large companies having common stock listed on the NYSE or NASDAQ. The S&P 500 index components and their weightings are determined by S&P Dow Jones Indices.

The indexes referred to are widely recognized, unmanaged indexes of market activity, and have been included as examples of the recent stock market behavior. Indices may or may not reflect the reinvestment of dividends; interest or capital gains and the indices are not subject to any of the incentive allocation, management fees or expenses to which a client portfolio may be subject.  It should not be assumed that the client portfolio will invest in any specific securities that comprise the index, nor should it be understood to mean that there is a correlation between a client portfolio’s returns and the indices.  Nor can one assume that correlations to the indices based on historical returns will persist in the future.  The Indexes are included for informational purposes only.