The Point and Challenge of Being Prepared

Beyond the traditional choice of our investment management style between categories such as value or growth, fundamental or technical, trading or buy-and-hold, we have tried to abide by two precepts:

For the last couple of years, these beliefs have led us to push back against the increasingly strident pressure from some fiduciaries, consultants and, fortunately, very few clients, who had been clamoring for us to reduce our large, prudential cash reserves. 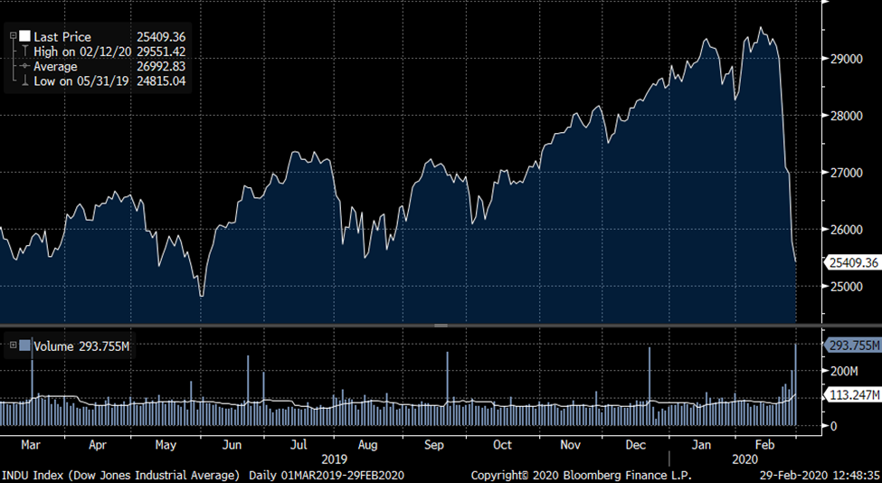 The over 4,000-point decline in the Dow Jones Industrial Average in less than two weeks did not merely erase a full year of previous gains. More importantly, it raised an additional question:

“What do you do with your prudential cash reserves when their use becomes justified?”

Although financial crises may not require a proximate cause, investors and observers often have little difficulty finding culprits after the fact.

There is little doubt that the current market correction was at least triggered by the spreading Coronavirus panic, which seems a legitimate concern. Still, judging from historical examples, while affected populations will undergo considerable suffering, it seems likely that the health problem will abate and hopefully be solved in a matter of months — or perhaps a couple of years.

From an economic point of view, however, the problem is the advanced level of globalization that the world has achieved in recent years. Today, most products are the end result of complex and far-reaching supply chains. Difficulties in any one of the countries making parts or supplies for an end product can badly disrupt the supply of that product around the world. Even if the supply chains can be restored, the process will take time and money, and cause labor displacement.

So, there is a chance that what could have been an economic hiccup will morph into a global recession. From an investment perspective, we believe, bear markets associated with economic recessions tend to dig deeper and last longer than those resulting from a mere correction of asset price due to a change in the investing crowd’s psychology. Past examples are all over the map but a typical correction might produce a 15-20% stock market decline, while one associated with a true economic recession could be as high as 50%.

Since we don’t know how things will eventually turn out, we need to be prepared for both the short term and the longer horizon.

In recent years, it seems that investors have put their steady faith in the power of central banks. At the first signs of weakness in financial markets, central bankers could be counted on to pump liquidity into their economies. With the physical economies remaining lackluster and resisting incentives to invest in plants and equipment, most of that added liquidity tended to flow into financial markets. That tendency largely explains the bull markets of the years following the Great Recession of 2008-2009.

Today, with interest rates close to zero (or even lower in much of the world), investors’ doubts have begun to appear as to how much more central banks can do to fight recessions. Even some central bankers seem to wonder how much dry powder they have left. Nevertheless, it is possible that, in a central bank last hurrah, a coordinated stimulus effort could produce a violent (and probably short-lived) stock market bounce back, based on investors’ remaining faith in the infallible power of central bankers to direct at least the stock and bond markets, if not the economies.

Without entering into a dangerous exercise in short-term trading, we have decided, for clients who are in a position that makes it possible, to invest about 10 percent of their current excess cash reserves in shares that are down 40%-50% from their highs. Most of these companies will typically be ones where we already own positions in our portfolios. However, we have also included a couple of companies with high growth profiles that, although still expensive by our traditional “value” standards, are seldom available at very low valuations.

For a portfolio that might have had cash reserves of 30% of its total value, for example, this recent decision would now leave it with 20% in cash and equivalents.

Beyond this first adjustment, committing the rest of our excess cash will probably await the kind of deeper decline typically associated with economic recessions – whenever one comes. But I have noticed, over a number of past bear markets, that the deeper and longer ones tend to produce a compression in the range of valuation measures such as ratios of price-to-earnings, price-to-cash flow, etc.

This means that in a major bear market, many companies with superior growth and profitability sell at valuations which, while not as low as those of classic “value” stocks, are much closer to them than in normal or more ebullient times. Often, these episodes constitute a rare occasion to acquire the shares of superior companies at reasonable prices.

Being prepared does not mean making decisions in advance. We have not yet reached compelling valuation levels for shares that have until recently remained quite expensive. But we have intensified our research on such companies, so that we may seize opportunities when their prices seem right. When this happens (and in full-fledged bear markets it can happen quite fast), we will be prepared with reserves of cash, and thus well-positioned to upgrade the long-term potential of our clients’ portfolios. Stay tuned…