We don’t time the market; we don’t know how

Recently I had a conversation with a prospective client who wanted to know about our experience managing family fortunes over generations. Coming from a money manager who always likes to be fully invested, he was intrigued by our choice of holding some cash on the sidelines, ready to invest. “So, you’re timing the market?” he asked. I answered with a smile that we don’t time the market, we don’t know how. 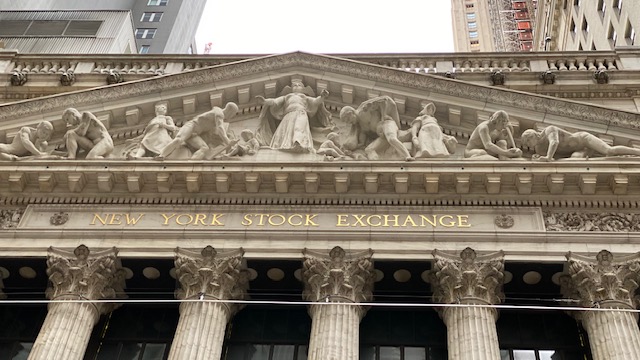 As we at Sicart see it, “timing a market” would be an attempt to stay fully invested all the way to the top, yet at the same time hoping that we would be able to sell early enough to avoid the pain of a drawdown.

My friend Jake Taylor, in his recent investor letter, shared a chart (see below) that I found eye-opening. It shows what fraction of bull market gains were “repossessed,” or dissipated in the following bear market. Since 1933, five bear markets have wiped out more than 100% of preceding bull market gains. One of those times happened during my career, and two happened in the first five years of my partner’s François Sicart’s career (1969, 1973). 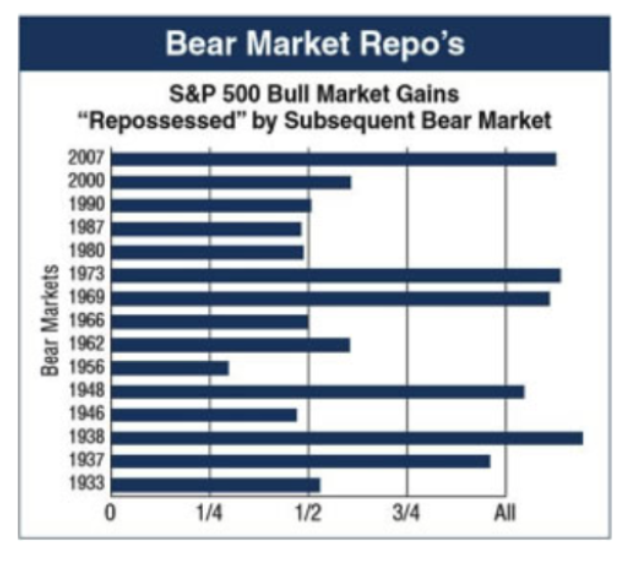 In my almost forty-year lifetime, the U.S. market has endured 5 bear markets that took away half or more of preceding bull market gains.

As of early 2020, the S&P 500 hovered at 3,300 — a long way away from the low of 666 reached almost 11 years ago on March 6, 2009. If the index were to give back half of the gains earned during this longest-ever bull market, we would see a round 40% drop from current levels. If it were to relinquish all of its gain, we would see an eye-popping 80% drop from here. We certainly hope that won’t happen. However, we can’t help remembering that 2009 lows dipped below the previous low mark, when the S&P 500 dropped by 50% after the Internet Bubble burst. If history teaches us anything, it is that past downturns don’t necessarily represent the floor for even the most dramatic drawdown.

We are not trying to scare anyone away from the stock market, quite the contrary. If anything, we strongly believe that everyone should be a lifelong investor. We also believe that stock investing is a great path to not only preserving, but also growing family fortunes over generations.

However, the movements of the stock market are sometimes irrational. Extreme optimism follows extreme pessimism, greed alternates with fear. We wish we knew how to call market peaks and troughs but it’s harder than it looks.  We remember well how some observers believed that early 1999 would bring the market peak, only to see NASDAQ (the technology index), double in the following 12 months. The bubble didn’t burst until March of 2000. Until not long ago, we have been hearing how just because the market has gone up a lot, it doesn’t mean it can’t go higher. Many have believed the Fed hasn’t finished pouring gas on the fire. In the meantime, short-sighted investors have been calling for more corporate buybacks that further bid up stock prices. Could we see the major indices climb another 100% from here? It’s not impossible. Anyone suffering from FOMO (fear of missing out) may get sucked in to the market frenzy.

Now, more recently, investors traded the risk of a market melt-up for the risk of a sudden sell-off. When I started writing this article, the U.S. stock market was reaching new highs with no signs of slowing down. As I’m putting finishing touches, we just witnessed a 1,000-point daily drop in the Dow Industrial Average with all major US-indices deep in red.

A melt up, a sell-off, just correction? The important question remains how can we know when to get in, when to get out? We honestly confess that we don’t know. We also suspect that anyone who believes they do is deceiving him- or herself — not to mention anybody listening to them.

The best approach for us has been to gradually take money off the table, trim our most overvalued positions, and, if possible, replace them with holdings that are more attractively priced.

We don’t time the market because we don’t know how to. Instead, we choose each investment based on its merits. Our securities (stocks) are selected based on quality, purchased based on value, and held with the business owner’s mindset. When the picking gets slim, we let the cash position grow. In turbulent times, we shop for bargains with the cash we’ve kept on the sidelines for this very purpose.

We are patient and prepared for the shopping spree of a lifetime.